Hi, Jennifer here again… your host for “the 1,000% Backdoor” Webinar with James.

We’re gearing up for this historic event…

And we couldn’t be more excited.

In fact, James is even making a bold claim…

Join us during the event on August 15th at 1pm, and…

James is willing to guarantee that you will see how to make 1,000% returns on your money before the end of 2017.

I recently sat down with James in an exclusive “sneak peak” Q&A session to ask him all my most burning questions.

Here’s what James told me... (CONTINUED BELOW) 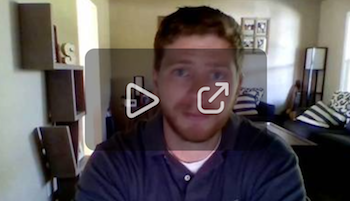 “Pay off all debt”
Reader from Norfolk, VA

“Create an environment where my children are cared for, homes purchased, education funded, life expectations created”
Reader from USA

Jennifer: Okay, so I get that the best way to make these huge gains is to find the world’s biggest and most breakthrough ideas…

And then to use your secret “1,000% backdoor” strategy to get into those ideas.

But here’s my question… for anyone at home that’s excited about this webinar… where do they start looking to find these kinds of opportunities?

James: Let me tell you with a quick story…

Remember when social media was first taking off?

It’s one of the biggest venture ideas of the past decade… and has spawned dozens of successful startups, including:

All of these ventures made early investors millionaires.

But here’s the thing…

For every blockbuster like Facebook, there are hundreds of social media startups that never made a penny… and disappeared.

Even if you’d been among the first to invest in social media, it wasn’t enough…

To be successful in venture investing, you MUST be able to spot the “good” ideas from the “bad” ideas before you invest.

And that’s where my secret comes in…

It’s a social media startup. It allows businesses to interact with their customers using an online interface.

At the time, it was unclear if Buddy Media would be a success. But he asked me if I’d be willing to buy a stake.

Well… as you can imagine… I hesitated.

On the one hand – I liked the idea of an “online interface” for businesses. But I wasn’t sure if the idea was revolutionary enough to make me money.

So before I proceeded, I investigated the opportunity and accessed one specific piece of information… which most people don’t even realize exists…

It took me only 5 minutes to do this… but this single piece of information was enough to confirm that the idea was among the top ideas for the new economy. So I bought in.

At a glance, you might think I just “got lucky.”

But here’s the thing: This sort of thing happens to me over and over again in my life… all because of one very simple approach I follow…

Jennifer: And it basically comes down to sorting the “good” ideas from the “bad” ideas, is that right?

You see – in Silicon Valley, there’s nothing more important than ideas.

They’re the basis of every success and the single greatest asset.

But at first glance, most people have no way of knowing which ideas are worthless… and which are among the best.

Here’s an example of what I mean…

Consider these 3 ideas… all of which are real ideas that were pitched to venture capital firms in the last ten years.

Idea #1: A smartphone that “bends” around your wrist

Idea #3: A website that lets you “chat” with celebrities

At one point, each of these 3 ideas attracted a different startup. Two went bankrupt and one became a $1.4 billion company that made early investors rich.

Can you spot which idea was successful?

Jennifer: Hmmm, I am not sure. They all seem like pretty good ideas to me!

James: You are exactly right.

And for most people, it would have been a pure gamble.

But over the past 20 years I’ve found a way of looking at any idea and determining – with a glance – whether it’s worthless, or has the chance to take off by 1,000% or more.

But I didn’t touch the startup.

And here’s the incredible part: As a venture capitalist, you would have likely needed $25,000 to buy GoPro when it was still private.

But the “backdoor” investment I found was just $29 a share!

Watch what happened next… 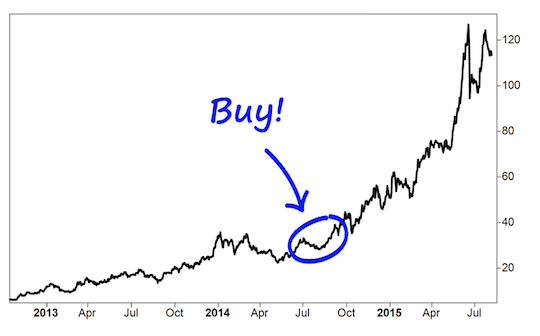 In other words: You could have more than quadrupled your money with one of the top venture ideas, from your kitchen table.

Plus, you’d have known it was a good idea BEFORE you even got in.

To sum up this “backdoor” investing idea…

1) You could make money a lot faster… unlike traditional venture investing, where it often takes 3 to 5 years to see a big exit, if you’re lucky.

2) If you get in early enough, you could often double your money, safely, no matter what happens to the economy or the broad market…

Does this make sense? Does it answer your question?

Jennifer: It does make sense.

But how did you know the idea of a “live action” camera would be successful – compared to all the other venture ideas?

James: Well… that’s where this secret gets even better…

For example, consider an idea I heard about back in 2009…

The idea was simple: a website that “shrinks” web links.

…and shrink it to:

When I first heard about this idea, I was intrigued… and wanted to invest in the startup behind it: Bitly...

But I hesitated – because the idea was unknown at the time. I had no way of knowing if Bitly would be among the best ideas or completely worthless.

How did I know the idea would be successful?

Simple. I went online and looked up some of the most successful startups from the past decade… like:

Then, I did something you might not consider a “secret” at all… but it’s helped me make a lot of money over the years…

In short, I looked up each one of these companies online… and I asked myself what they ALL have in common…

On the surface, nothing.

Some were in social media… others were in publishing… banking… search engines… you name it.

But when I looked BEYOND each company, at the venture capitalists who were buying stakes, I soon noticed a pattern take shape…

The pattern: On the investor list for each startup, I saw the same names appear over and over again… one after another.

Jennifer: So to make sure I’m clear, you basically checked to see if other rich, successful people were investing in the idea, to determine if it was a “good” idea or not?

Peter Thiel… an early investor in Facebook, who turned his $500,000 stake into more than $1 billion…

Chris Sacca, an early investor in Twitter who made over 14 times his money back when the company was completely unknown…

And that’s when I made a huge discovery…

Jennifer: What was that?

James: You see – even a “bad” venture investor will often have at least one major career success.

But when I looked at the top startup investors… I saw that not a single one of them were “one-hit wonders.”

Instead, they all had a history of making 1,000% gains… over and over again.

Chris Sacca, for example, was an early investor in not just Twitter… but also in Uber and Instagram – which became household names.

So I asked myself: How is this possible?

How have these guys been so successful?

Well… I knew there was only one way to find out: Meet these investors in person – and ask them myself.

Jennifer: So is that what you did?

You went out to try to contact these people yourself?

Then, I did something you might find hard to believe, but it’s absolutely true.

I went out and had conversations with every single one of them.

And no, I didn’t email them…

In fact – I ended up meeting or having calls with some of the top businesspeople and investors in America, including…

In fact, today Jim Cramer and I are good friends.

It wasn’t easy. But since I began – I’ve managed to make a connection with every major hedge fund manager in New York and every major venture capital firm on both the East Coast and in Silicon Valley.

That might not sound like a big deal to you… but frankly, I don’t know of anyone else in America who has established the types of connections I have.

Jennifer: And how did you do this?

James: Often, I just picked up the phone.

Of course… I had an unfair advantage. You see – as an entrepreneur and investor, I’ve written two books that landed on The Wall Street Journal bestseller list. And one book was named a “must-read” by Forbes.

For example, I’m friends with one of the top venture capitalists in Silicon Valley… a guy so well-known he’s asked me to keep his name anonymous.

He was an early investor in Twitter and Uber, two of the hottest ventures of the past 10 years. He’s made tens of millions of dollars.

Not long ago, he invited me to his house for breakfast.

I have meetings like this all the time… where I hear about some of the best opportunities in the country… from the smartest people I know.

If I sold today, they’d be worth about $8 million… in sectors ranging from restaurants to software to transportation.

Jennifer: So you’ve spent the past decade interviewing, learning from, working with and trying to understand the secrets of the most successful and interesting people in America. Especially those starting the most exciting new businesses...

But can you tell us how regular folks can use this “backdoor” to get into these ideas like these high-powered investors?

If you want to invest in the top ideas, you have to follow the smartest investors – especially if you use the “backdoor” secret I’ve developed, which no one else I’m aware of has managed to replicate

On August 15th I’ll be revealing the details of my TOP 10 ideas to invest in right now.

Where the potential to make 1,000% on EACH of these is very real.

So, Jennifer… that’s what I’m going to show everyone on the 15th. And why it’s so critical to tune in!

And for you at home. Tune in to hear James detail his TOP 10 ideas when we “go live” on August 15th at 1pm ET.

You don’t want to miss this!